Quick Guide for Expats Planning to Settle in Delhi

New Delhi is the capital of India, but you already knew that. What you didn’t know is that New Delhi is just one part of the ‘real’ Delhi. The other part to the north of New Delhi is Old Delhi, which was earlier known as the original Delhi. The two parts together are called Delhi as we know it. Demography apart, the city is known for its incredible mix of languages, cultures, architecture, and much more. It is this sustained mix of culture and respect for every tradition that makes Delhi ideal for expats planning to settle in Delhi.

Being the national capital, Delhi leads the country in terms of development. Players of several key industries like IT and Telecom have their operation bases in Delhi. Due to the ever-expanding population and unrelenting traffic situations, besides similar work-space, many of these companies have expanded their operations to the cities located closest to Delhi like Noida and Gurugram.

Just like everywhere else, you can contact a broker in Delhi to help you with house hunting. What you need to know are the places where expats generally live in Delhi. Most of the expats choose to live in a greener and safer locations like Gulmohar Park, Safdarjung Enclave, Panchsheel Park, Hauz Khas, Green Park, Defense Colony, and Vasant Kunj. For a more upscale locality, you can also consider screening the Jor Bagh area.

Finding a Suitable Job in Delhi

Most of the expats often land in India with job offers in hand. If you aren’t one of them, there’s nothing to worry about. You could easily find a job as per your skillset in the Delhi-NCR region. There are a lot of companies that prefer hiring native English-speaking people only. You can approach them directly or take a consultant route to find a job opening. Alternatively, you can also contact the embassy office in India to get more insight into jobs. Many foreign expatriates and diplomatic staff are posted to Delhi and other parts of India. 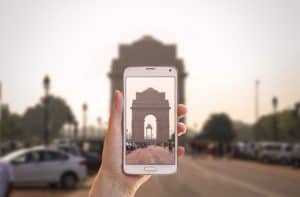 Moving Around in Delhi

There are very few paved sidewalks in Delhi so you will often have to beside the roads. In many places, the local bikers don’t think twice before driving on these pavements to avoid the heavy rush on the roads. Many expats drive around Delhi by themselves, but the traffic situation is not different for them too around the city, especially during the peak hours. Auto-rickshaws are fun, but not the best medium to travel. You could hire an Uber or its local competitor Ola to go around. Metro Rail (subway trains) is a wonderful affordable medium to explore the city too.

If you are in Delhi but haven’t tried the street food, you are missing out on something very unique. Having said that, you must steer clear of the eateries where you get the slightest hint of unhygienic ethics. There are several wonderful restaurants around the city that are worth a try. Indian choices are everywhere, but if you prefer some international options you could explore Greater Kailash (GK), Hauz Khas, Defense Colony, New Friends Colony, or Khan Market.

Partying is very common in Delhi. These parties happen just about everywhere. Several expats host these parties too, giving you just the platform to make some acquaintances and good friends. Alcohol is served in most of the city bars that are Indian and may not be to your liking. You can purchase your kind of drinks from shopping malls too. There are government-authorized wine and beer shops too around the city, but those are mostly flocked by local men and may not have the bottles of your liking. At the same time, while partying, stay alert of your surroundings. You should take common-sense precautions as an expat or tourist in Delhi, especially at night.

Healthcare System and Facilities for Expats planning to settle in Delhi

Almost all the hospitals in the city have English-speaking doctors, so communication shouldn’t concern you much. However, the public healthcare system receives very low funding from the government, so the infrastructure is not good. The large population also puts very high stress on the healthcare system. Public hospitals are always crowded. Hygiene can also be an issue in some of these hospitals. Many public hospitals may also lack the necessary equipment; however, that is usually not the case. Check out this CDC link to know more about expat health and healthcare in India.

The private healthcare system in Delhi is much more advanced. Not all private hospitals are amazing, but a few of them can compete with the world’s best in terms of infrastructure. Their charges can very high for some special treatments. Some private hospitals may also require an upfront payment in addition to insurance, so expats planning to settle in Delhi must collect the receipts to claim reimbursement. Expats are always suggested to obtain international health insurance from a global insurance company to avoid all hassles and enjoy their stay with complete peace of mind.

Top 7 Reasons to Become an Expatriate in Colombia

5 Reasons Why You Should Retire in Costa Rica